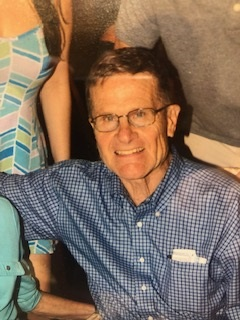 Please share a memory of George to include in a keepsake book for family and friends.
View Tribute Book

George Michael Harlan, 85, of , died peacefully at home surrounded by his loving  family on Saturday, October 10, 2020.

He was born in Baltimore on June 5, 1935, the son of Paul and Katharine Baxter Harlan. He grew up in with his four brothers and sisters.

Upon graduating from the of in 1957 with a Bachelor's Degree in Chemical Engineering, George came to to work in Research and Development at Union Carbide in . During his 40 year career, he traveled to 45 states, , , , and on company business.  George was a traveler.   He received numerous patents for his work. He was a founding president of the ASTM committee for degradable plastics. He retired in 1997 as a Sr. Development Associate.

Upon retirement from Union Carbide, George embarked on his second career. He was a volunteer Medicare counselor at the Somerset County Office on Aging for 23 years, the last 20 as coordinator for the State Health Insurance Assistance Program (S.H.I.P.). He was recognized twice by the Freeholders for volunteer service to 's seniors and was named one of the top ten counselors in the state.

George was also a member of the Advisory Council for the Somerset County Office on Aging.  He served 30 years as a member of the Zoning Boards of Adjustment in and , retiring in 2010 as Chairman of the Board in . He was a Republican County Committeeman for 35 years in and and was the Somerville Municipal Chairman from 1978-1981. He was in the Air Force Reserve, Critical Skills Unit, from 1959-1966.

George was pre-deceased by his parents, Paul and Katharine Harlan, his brother Paul Jr., his sister Oleita Genshaw, and his daughter-in-law Sharon DeStasio Harlan. He is survived by his loving wife, Marsha Soriano Harlan, his son Michael Harlan, and his grandchildren Victoria and Jack, whom he adored. He is also survived by his brother Henry Harlan and his sister Louise Umbarger.

To send flowers to the family or plant a tree in memory of George Harlan, please visit Tribute Store
Sunday
18
October

Share Your Memory of
George
Upload Your Memory View All Memories
Be the first to upload a memory!
Share A Memory
Send Flowers
Plant a Tree