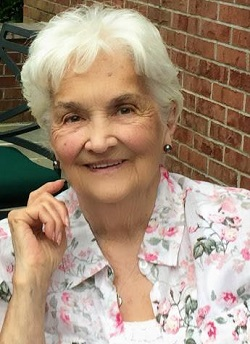 Helena K. Lapchuk (Kimak) reposed on Monday, December 17, 2018 at Princeton Medical Center after a beautiful and blessed life of 88 years.

She was born in Elizabeth on June 9, 1930 to Mary and Peter Kimak. She was a loving, devoted daughter to her parents for as long as they lived.

Helen was married in 1951 to John Lapchuk, who pursued her after they met at a church dance. She did not immediately take to him, but his persistence eventually brought them together. They married on January 20, the wedding anniversary of her own parents. What was expected to be a snowy, cold day was record-breaking warm and beautiful instead. This warmth and beauty carried forward into their marriage, which was an epic love story, full of mutual respect, sacrifice, fun, humor, and caring the likes of which are rarely seen.

Helen took seriously her career and was eager to begin working immediately after completing her education. Her first job was at Modern Industry on Madison Avenue in New York City, an exciting time and place in her life. After having her children, Gregory and Linda, she became an Executive Assistant at American Hoechst/Sanofi. She was an administrative professional par excellence – organized, diligent, punctual – and had a special way of managing things with persistence and detailed attention. She elevated the workplace experience for those around her, and her skills were noticed and valued by her colleagues.

Helen was a faithful Orthodox Christian. She was a member of Ss Peter and Paul in Manville for most of her life, where she raised her children and attended services regularly. She lived her faith through worship, prayer, and almsgiving. She led by example with her stewardship, generously and freely giving financial support to the church and cemetery. Her generosity extended to other non-profit organizations, including veterans, animals, and other people in need.

At mid-life, Helen faced numerous challenges – the premature loss of her mother, the illness of her husband at a young age, and the untimely death of her son. In each event, she cared for those who grieved in the wake of the sadness – her father, her husband and children, and her son’s widow and children. She carried on with faith and strength despite her own grief. She was a vital, indispensable pillar of support to her family during different phases of her life. This, perhaps, was her greatest calling.

Helen spent her golden years raising her grandchildren, lovingly enabling their activities and interests, celebrating their achievements, and supporting them in their times of need. She was known for her blunt sense of humor and directness, a trait that amplified in her later years, and brought lots of laughter to others, especially her grandchildren. She was also a nurturing caregiver for other families, helping two single mothers raise their children and loving them as her own.

For her entire life, she had a very close and cherished relationship with her sister Irene; they even lived around the corner from each other in Easton, PA for several years. Once distance separated them geographically, they maintained their close connection through daily phone calls and occasional visits and remained closer than ever.

Helen was an avid reader of presidential and other biographies and enjoyed learning about American history. Later in life, she had the opportunity to visit historic American landmarks in Boston and other areas in the Northeast. She shared her retirement with her beloved dog, Sashi, who kept her active in her later years.

Helena is predeceased by her husband John, her parents Peter and Mary, her son Gregory, and her two brothers Peter and Mikhail.

She is survived by her daughter and son-in-law, Linda and Thomas Gardner, daughter-in-law Argyra Lapchuk, three grandchildren, Tatiana and Jeffrey Hoff, Alexandra Lapchuk, and Samantha Gardner, sister Irene Hyll, great-granddaughter Theodora Hoff, nieces and nephews, and many close friends that were like family, including the V. Rev. and Mrs. Paul Shafran, Daria, Natalie, Mary, Toni, and Kate.

In lieu of flowers, donations can be made in Helen's memory to:

Saints Peter and Paul Orthodox Church, Manville, NJ, where Helen was a parishioner for decades, and where she raised her family and buried her husband and son.

The Deacon Gregory Lapchuk Endowment for Student Scholarship and Seminary Operations at St Vladimir's Orthodox Theological Seminary. This newly-established endowment remembers Dr Gregory for his humility and service to the seminary and to the church and honors the parents that raised him and supported his path through seminary.

May Helen's soul dwell with the blessed. Memory eternal!

Share Your Memory of
Helena
Upload Your Memory View All Memories
Be the first to upload a memory!
Share A Memory
Plant a Tree