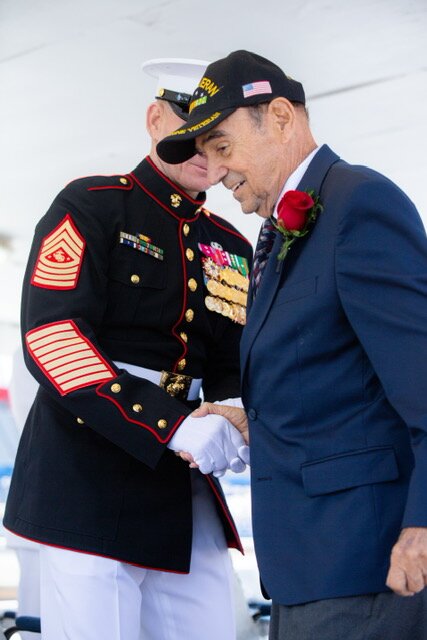 Please share a memory of Donald to include in a keepsake book for family and friends.
View Tribute Book
Donald Basilone, 92, of Newport Richie, died August 13, 2022. Donald Basilone was the youngest sibling of the Basilone family, and brother of GySgt. John Basilone. Parents Salvatore and Theadora Basilone had 10 children, Donald being the youngest. His brothers Al, George, Carlo, and Angelo. His sisters Mary, Katherine, Dolores, and Phyllis.
He is survived by his wife, Jean, and his three children, Donna Mooney and husband Raymond, Cheryl Devan, and son Glenn Basilone. He is also survived by his three grandchildren Samantha Ray, Chelsea Lynn, and Joshua, as well as, many nieces and nephews.
Don, lived in a 55 & older condo community where he served on the Board of Directors, along with volunteering for other clubs and committees. Don was an avid golf player and was known to play twice a week. His last game was May 7th, 2022.  Don often enjoyed having lunch with his good friend, Bill Hefler, both were known to go to the Hard Rock Casino in Tampa on occasion. He was also an avid card player and ran the community Poker game for years. Don was highly regard in his community and will be missed by all.
Don’s love for his Country and pride in his older brothers accomplishments in WWII inspired him to join the Marine Corps, where he eventually fought during the Korean War.
Despite not being in the best of health, this past June, Don was fortunate enough to be apart of and witness the Christening Ceremony of the USS John Basilone DDG-122 Navy Destroyer. Donald was also known for his attendance at the Basilone Parade for the last 17 years, as that was one of his favorite ways to honor his brother. The family has decided the best way to honor Don is by burying his urn right next to the GySgt. John Basilone Statute in Raritan New Jersey, their home town.
As Don always said, Semper Fi!
The Celebration ceremony will begin 1pm  on Monday, September 12, 2022 concluding with the Burial of cremains at the Basilone Statue, Somerset Street, Raritan, NJ with Military Honors.  All are welcome to attend and pay tribute to the last surviving brother of the Basilone Family. Arrangements are under the direction of the Bongiovi Funeral Home, Raritan, NJ (908) 725-1887.  To send an online condolence visit http://www.Bongiovifuneralhome.com
"Forever in our Hearts
To send flowers to the family or plant a tree in memory of Donald Basilone, please visit Tribute Store
Monday
12
September

Share Your Memory of
Donald
Upload Your Memory View All Memories
Be the first to upload a memory!
Share A Memory
Send Flowers
Plant a Tree