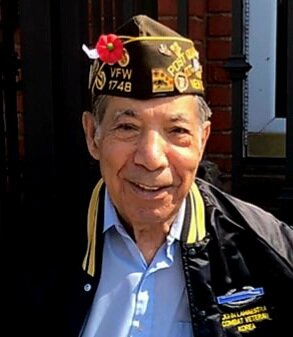 Please share a memory of John to include in a keepsake book for family and friends.
View Tribute Book

John was born on December 17, 1930 to the late Rose and Basilio Lamaestra in Brooklyn, NY. John grew up during the Depression in Brooklyn and was the 12th of 13 children. His parents were born in Italy and immigrated to the U.S., where they met.

Growing up during the Depression with 12 brothers and sisters meant putting food on the table was a priority and everyone needed to chip in. John, at six years old wanted to help, so he fashioned a shoe shine box and hustled nickel shoe shines, bringing his hard-earned nickels home to his Mom.

After the family relocated to South Bound Brook, John attended Bound Brook High School, graduating in 1949. He took a job at the local Bakelite plant. In 1951, he was drafted into the Korean War.

John served in the US Army during the Korean Conflict in Fox Company E 5th Cavalry Regiment earning the rank of Corporal.  He was awarded the Korean Service Medal with two Bronze Service Stars, US Service Medal and Combat Infantry Badge. He also boxed in the Army and was very successful as a light-heavyweight. John was discharged from the Army in 1953.

On May 7, 1955, John married the love of his life and was a devoted husband to Gloria Lamaestra at the Catholic Church of St. Ann in Raritan, NJ.  He served as a Eucharistic Minister there, and they remained active lifelong parishioners. Together they raised their three sons in Raritan.

John and his wife liked to travel to Italy and take their children on vacations.

John eventually worked his way back to Bakelite/Union Carbide where he worked as an HVAC Tech for 40+ years. He also had his own HVAC company, DJ Lamaestra.

John served several terms on the Raritan Borough Council and held multiple committee assignments during his tenure. He most enjoyed assisting residents with issues and meeting people when campaigning.

John was a Member of the Knights of Columbus Raritan Council and 4th Degree Sir Knight of George Washington Assembly of Somerville. He was a proud member of VFW Post 1748 and American Legion Post 280, as well as a Life Member of the Elks Lodge of Somerville, NJ.  In 2013, John was the Grand Marshall of the 32nd John Basilone Parade, celebrating the local Congressional Medal of Honor winner.

In addition to his involvement in these various civic groups, John was very generous with his time and talent by assisting many of his neighbors, friends and anyone else in need. It seemed as though anyone you spoke to in town had a story about John helping them. He had an infectious smile and great sense of  humor with a heart for the downtrodden or anyone else who needed to talk.

John was an avid sports enthusiast and loved his New York Rangers, New York Mets and the New York Giants in particular.

John is survived by his loving sons, John(Laura), Darryl(Debbie) and Scott(Rosemary) and his cherished grandchildren Christine, Bryan and Mario. John is also survived by two sisters, Ann Caridi and Nancy Puchalek. He is predeceased by his wife Gloria, his parents Rose and Basilio, and his siblings, affectionately known as: Gypy, Kay, Micky, Nick, Frankie, Sophie, Basi, Pete, Patsy, and Valie.

Thank you for your willingness to always do the hard work and to love us all unconditionally. You'll forever be our beacon guiding us home. We love you, Dad.

To send flowers to the family or plant a tree in memory of John Lamaestra, please visit Tribute Store
Thursday
5
May

Share Your Memory of
John
Upload Your Memory View All Memories
Be the first to upload a memory!
Share A Memory
Send Flowers
Plant a Tree