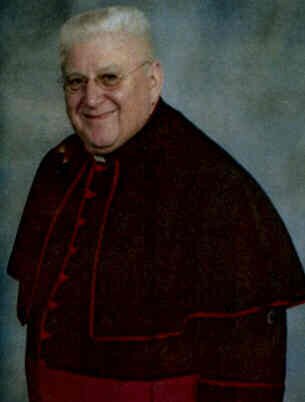 Please share a memory of Reverend Michael to include in a keepsake book for family and friends.
View Tribute Book

Monsignor Michael J. Corona, 80, died February 5, 2022. He is survived by his brother Bernard and sister-in-law Maria, many nieces, nephews, and Godchildren. He was predeceased by his parents, Bernard and Theresa (Tarangelo) Corona, his brothers Daniel, Carmine, twin brother James and his sister Roseann “Sissy” Corona.

As a good priest, he is survived by his spiritual families, more members than can be counted.

Michael Corona was born and raised in Raritan. His family were members of St. Ann Parish in the borough and he attended the public schools there. Monsignor once said the first St. Ann's pastor he remembered, Father Russo, wanted him to go to a Catholic high school so he then attended St. Peter's High School in New Brunswick.

It was in high school that Msgr. Corona's vocation was sparked by Msgr. Carl Wagner. Monsignor Corona stated, "I was impressed by Msgr. Wagner who was the Vocations Director for the Diocese of Trenton, and so was my classmate, Richard Behl, as well as a few other fellow students of ours. We decided we would at least apply to the seminary. We did and were accepted."

After graduation from St. Peter's in 1959, Msgr. Corona attended the minor seminary at St. Charles College in Catonsville, M.D. and then earned a bachelor's degree in philosophy at Saint Mary Seminary and University, Baltimore, where he also studied theology.

Bishop George W. Ahr ordained Msgr. Corona to the priesthood for the Diocese of Trenton May 25, 1968 at St. Mary Cathedral, Trenton. His first assignment was at St. Peter the Apostle Parish, New Brunswick. Together with Father James McGovern and Father Anthony Gambino, he served the parish as a member of the diocese's first team ministry. "We were the triumvirate," he said. Three years later, he was appointed parochial vicar at St. James Parish, Red Bank, and in 1974 was assigned to Holy Cross High School, Delran, where he served as vice principal and then principal.

In 1979, Father Corona was installed as the parish's 11th pastor of St. Philip and St. James Parish, Phillipsburg, a position he held for almost three decades. When the parish became part of the newly established Diocese of Metuchen in 1981, he continued to serve his parishioners while taking on more and more diocesan responsibilities from serving on the Presbyterial Council and the College of Consultors to moderating a Scouting program and starting a Serra Club for vocations in Warren County.

In 1983, Msgr. Corona was named diocesan Director of Communications and two years later as vice-chancellor of Communications, a position he held until 1992 when he was appointed director of Development (later Stewardship). He became known for his work in Stewardship. In 1997, Msgr. Corona joined the executive board of the National Catholic Stewardship Council, which evolved into the International Catholic Stewardship Council (ICSC). He chaired the organization's Millennium Conference in Washington, D.C., and served as president of the ICSC executive board.

In 1991, Pope John Paul II named Msgr. Corona as a prelate of honor. At the behest of Bishop Bootkoski, Pope Benedict XVI named Msgr. Corona a Protonotary Apostolic Suprenumerary, the highest level of the Prelates of Honor. He is only the second priest in the Diocese of Metuchen to receive such recognition. He was also a Commander for the Holy Sepulcher.

Public viewing will be held at St. Luke's Church, 300 Clinton Avenue, North Plainfield, from 3:00pm-6:30pm on Wednesday, February 9, 2022. Bishop Paul Bootkoski will preside at the 7:00pm Vigil Mass for a Priest.

The Most Reverend James F. Checcio, Bishop of Metuchen, will preside at the Funeral Liturgy at 11:00am at St. Luke's Church. Entombment will follow in St. Bernard Cemetery, Bridgewater, NJ.

In lieu of flowers, donations may be made in his memory to the Foundation of Catholic Education at the Diocese of Metuchen, P.O. Box 191, Metuchen, NJ 08840.

To send flowers to the family or plant a tree in memory of Reverend Michael Corona, please visit Tribute Store
Wednesday
9
February

Share Your Memory of
Reverend Michael
Upload Your Memory View All Memories
Be the first to upload a memory!
Share A Memory
Send Flowers
Plant a Tree