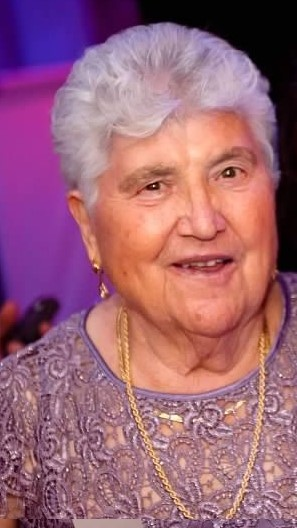 Raritan- Anna DiBetta, 88, died peacefully at home on April 7 2020, surrounded by her loving family. Anna was born in Stefanaconi, Italy to the late Paolo Defina and the late Serafina Foti Defina. She came to the United States in 1967. She had worked for Johnson & Johnson in the maintenance department of Ortho Diagnostics in Raritan and retired in the late 1980s. She was a communicant of St Ann’s RC Church in Raritan and was a member of the Altar Rosary Society there. She loved cooking and was devoted to her family. Anna looked forward to family gatherings, her smile lit up a room always smiling. She called everyone “Bella or Bello”, she appreciated and loved everyone, even her grandchildren’s friends called her “nonna”! She always said “I lova (love) you too much!” in her little Italian accent. She will be missed tremendously by all who knew and loved her. Mrs. DiBetta was preceded in death by her parents as well as her brothers, Domenico and Andrea, and her sister, Maria. She was survived by her beloved husband, Nicola DiBetta; two sons: Philip (Nancy) DiBetta of Bridgewater and Paul (Crystal) DiBetta of Milford; her daughter, Anna (Ken) DiGraziano of Raritan; Her sister, Catherine Loschiavo of Australia; her grandchildren: Nicole, Anthony (Jamie) and Nancy Lynn DiGraziano and Adam, Sarafina and Nicolas DiBetta; her great-grandchildren: Vincent “Leo”, Nicholas, Kenneth James ‘KJ’, Hayden and Silas; and had many nieces and nephews here and in Australia. Entombment was in St Bernard’s Cemetery Mausoleum, Bridgewater. Memorial services and mass will be announced at a later date. The family requests memorial contributions be directed to Cancer Research Institute, 29 Broadway, New York, NY 10006. Arrangements under the direction of the Bongiovi Funeral Home 416 Bell Avenue, Raritan, NJ 08879 (908-725-1887). “FOREVER IN OUR HEARTS”
To plant a beautiful memorial tree in memory of Anna DiBetta, please visit our Tree Store

Share Your Memory of
Anna
Upload Your Memory View All Memories
Be the first to upload a memory!
Share A Memory
Plant a Tree