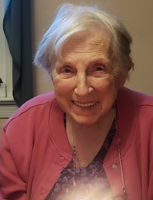 She was born August 19, 1930 in Cleveland, Ohio to Herbert and Margaret Boldt.  She married her High School sweetheart, Joseph A. Sullivan, in July of 1953 who preceded her in death in 1994.

Evie loved to bowl (also worked as score keeper for regional tournaments), fish, play bingo and cards (especially pinochle), spend time with her grandkids, bake and sort host with the Carmelite Nuns, go to mass, and venerate the host.  She was a lifelong singer.  Out of high school she sang with the Don Large Chorale WJR Detroit and sang in church choirs as long as she could.

In Detroit she worked for Michigan Bell in the Comptroller’s Office.  In Traverse City she briefly worked again for Michigan Bell, worked as a Kelly Girl at Kellogg Wholesale Building Supply, ran a paper route for the Record Eagle, worked at the Clark Animal Hospital, and helped her husband run a poodle grooming service "Pampered Pooch".

Evie prayed often that she would be allowed to keep her faculties to the end.  She even had an experience where she knew that God would grant her request.  Up until the very end we would get her a lottery ticket that was good for 2-weeks.  We would read her the numbers once, since she couldn’t read them on her own, and she would remember them for the duration.  God granted her request.

In lieu of flowers, the family is requesting that donations be made to Carmelite Monastery, 3501 Silver Lake Road, Traverse City, MI 49684-8949.

Evie will be cremated and a service in Traverse City (TC), Michigan will be arranged some time in the summer before being interred next to her husband in TC.