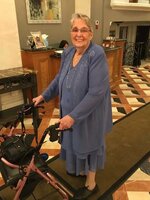 Geraldine A. “Jerry” (Dencklau) Sira, of Hanover, passed away on January 9, 2022 at the age of 84. She was the wife of Adrian “Ed” Sira; the mother of Richard Sira, of Hanover, Raymond Sira, of Shawsville, VA, Adrianne Ferenczy and her husband, Jeffrey, of Staten Island, NY and the late Russell Sira; the sister of Jennifer Dencklau, Albert Dencklau and his wife, Susan and Nancy Connors and her husband, John; the daughter of the late Charles and Eleanor (Hobbs) Dencklau. She is also survived by 6 grandchildren and 3 great-grandchildren.

Geraldine Ann (Dencklau) Sira, Jerry as all of her family and friends would know her was the oldest of 5 children born to Charles and Elenor Dencklau. She grew up in and around Plainfield New Jersey. Although only a member of her senior high school class  for one year, her yearbook says she very quickly became a well liked member of her class and her ambition was to be married and have a big family. She married Adrian R. (Ed) Sira on December 11, 1955 and did go on to have that large family. She was the person who held the family together through good times and hard times. Ed and Jerry settled into Raritan New Jersey were her home became the one that all of her children's friends would also call their second home and would refer to her as their second mom. She never missed sending you a card or giving you a call on your birthday and would welcome everyone into her home with open arms and make them feel like family.

When her children were young she operated a daycare center out of her home and often kept up with the kids she cared for long after they left her care. She started working for what was then Somerset Medical Center (now RWJ University Hospital) in Somerville New Jersey as a volunteer before eventually working many years purchasing supplies for the maintenance department until her retirement.

Aside from her family her other great loves were the New York Mets, Johnny Cash, jigsaw puzzles, reading, butterflies and Christmas. She loved baseball and played on a local softball team. She was a lifelong New York Mets fan, attending many of their games. Her guest room, known as the Mets room, is decorated with Mets memorabilia. Her passion for collecting would be passed on to all of her children. She loved country music, especially Johnny Cash. She was a master at jigsaw puzzles and although people tried, they could not find one that was too difficult for her. Jerry was a passionate reader, never going anywhere without a book in hand in case she had a few spare minutes. Her love of butterflies and birds can be found throughout her house and at Christmas time she would transform her home into a winter wonderland and would bake cookies by the dozens for everyone she knew.

Ed and Jerry moved to Hanover Pennsylvania when they retired. It was not uncommon for their house to be filled with more relatives or friends for a weekend or holiday than one would think possible. No one ever went hungry when visiting and she was well known for her chili.

In 2014 Jerry suffered an unexpected sudden heart attack. She was able to be with us until now due to the quick actions of her husband who knew CPR. She had a number of other health scares in recent years but always bounced back and was still driving and taking care of her family until her recent hospitalization. In early October she fell and fractured her hip. She underwent surgery to stabilize the hip but soon developed an infection that she was unable to recover from. She passed peacefully with her family by her side on January 9th, 2022.

"Forever in our hearts"